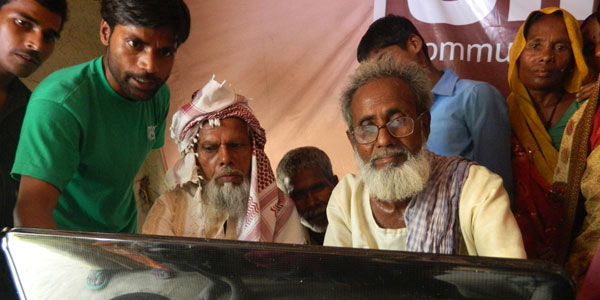 In May 1, 2013, Digital Empowered Foundation started Ratnauli CIRC centre, aimed as information, communication hub dealing with products and services in this regard serving the needs of the local communities in education, health, livelihood, public service delivery services and others. One important purpose of these CIRCs is to fulfill the content needs of local communities through online and offline facilities.
Hope is a repudiation of today’s desperation and a celebration of tomorrow’s opportunities. The hundreds of workers get the details of their job card from Ratnauli CIRC centre. They show it to the other villagers who were not aware about this. In this way, CIRC-Ratnauli movement has voiced the collective frustration of the people. The NREGA workers are hoping that this movement will be the father of change in their village.They dare the stormtroopers of a paranoid local governance institutions, awaken the working class, and shake the foundations of a corrupt regime that kept changing its fig leaf in its anxiety to curtain shame. This is the magic of CIRC.
Due to Community Information Resource Centre the villagers of Ratnauli now get the Internet connectivity where there is rarely electricity supply, just the odd TV set and no roads to speak of. Moreover, there the people are barely literate, who haven’t been near a computer in the past.
In the last six months, with nearly 10,000 beneficiaries, it is fast becoming the citizen’s tool to fight corruption in NREGA in Ratnauli. Not just in Ratnauli but across 24 Panchayats, including Patahi, Toorky, Mahantmaniyari, Gwaridih, Dumari, Harishankar, Majhauliya and Rampurmani villages. The ultimate goal is to equip the people with Information.
About the author

Related posts
Knowledge of Digital Tailoring keeps Vimala up-to-date with the latest trends
May 24, 2016
Anwar aspires to take his knowledge far & beyond
May 24, 2016

Republic Day was celebrated at various CIRCs across the country
January 26, 2016
Search in website
Our Partners
GET IN TOUCH!