You are here:
ENTREPRENEURSHIP & LIVELIHOODS 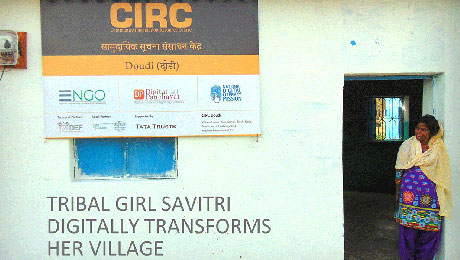 25 year old Savitri Pawar lives in Doudi, a tribal village in the Hoshangabad District of Madhya Pradesh. The region is mostly inhabited by the indigenous Gond tribal community, having their own unique lifestyle. The Gonds residing in this region are mostly cut-off from progress. Savitri is currently pursuing her BA. However, along with studies, she is doing much more towards connecting her community with development. As a child, she used to work part-time in labour jobs, along with her studies. Although she hailed from a backward community, her aspirations were high. All she wanted was to work towards the betterment of her community. She started working closely with change-maker organisations at her village level and observed closely their way of operating towards village development. She began working with Narmada Mahila Sangh, where she got the opportunity to learn how to work on a tablet. For record keeping, surveys or documentation, she took her tablet everywhere she went during mobilisation. She made efforts towards empowering tribal women with digital knowledge and information of government schemes that have launched to benefit them. The work that she had been doing was noticed by DEF during a community meeting and was offered the opportunity to manage and lead a CIRC opened at her village. Expectedly, she was hesitant to take up such a big responsibility. DEF team helped boost her confidence by providing her guidance at every step. Moreover, she thought about the people of her community who were in dire need of digital education and access to digital and information services. She decided to become part of the initiative. There was a time when she was too scared to touch a computer herself. Now, she is ready to teach the entire village computers. Savitri has also been helping people get advantages of government schemes and services by providing them with proper information and helping them in applying for them. She takes pride in herself for being part of endeavours towards transformation of her village.