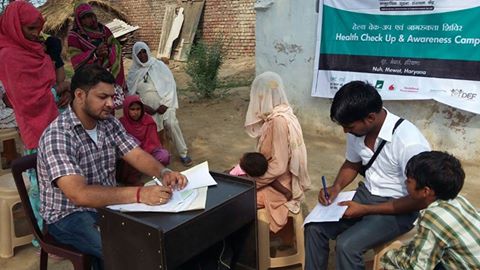 CIRC Tain in District Nuh, Mewat of Haryana has been rigorously conducting health camps at the centre and neighbouring areas. For this, the centre staff has established linkages with Government Hospitals, health departments and government medical colleges. Doctors and nurses volunteer at the health camp and conduct OPD consultations and also run tests for diseases including Malaria and Dengue. Twelve health camps have been organised so far through which more than a 1000 people have been benefitted.  Besides at the centre, these health camps have also been set up in slum areas and areas resided by labour population who do not have access to health services. CIRC staff also considers this as a good opportunity to mobilise the masses about the importance of digital education and that they can visit CIRC to learn computers and avail digital services at nominal rates.