You are here:
Success 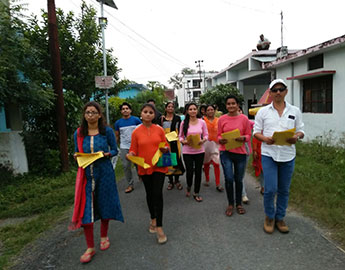 Dengue is now an ‘epidemic’ in India. In the last year, India has lost 58 lives and seen 36635 cases of Dengue. Dengue is spreading in the northern states and Uttarakhand is one of states that are severely affected. According to the recent reports more than 50 people were affected by dengue virus besides the other communicable diseases that are spreading as a result of the heavy rainfall. A student from CIRC Halduchaur was also reported with Dengue which compelled the CIRC entrepreneur to start a Dengue Awareness Campaign in the village of Haldwani. CIRC Halduchaur took an initiative to build a more informed society. They went from door to door to spread the awareness and tell people of the precautionary measures, safety measures, symptoms and possible effect of the virus. Apart from CIRC students, local journalists, social workers, school teachers took part in the Campaign which stated from CIRC Halduchaur to till Lalkua area, covering 5.6 km around the village.